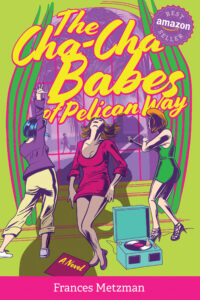 Metzman (The Hungry Heart, 2012) offers a mystery novel about a trio of women attempting to solve a string of murders in a Florida retirement community for people 55 and older.

When 65-year-old Celia, a resident of Boca Pelicano Palms in Florida, gets a call in the middle of the night from her friend and neighbor Marcy, also 65, about a vaguely described “big problem,” she wakes their 69-year-old mutual friend Deb, and heads over to help. Celia would do anything for Marcy or Deb—they recently talked her out of a suicide attempt, after all—but she doesn’t yet realize how her loyalty will be tested. When Celia and Deb arrive at the office of Melvin Onstader, the retirement community’s board president, they discover a nude, struggling Marcy “prone on the desktop buried up to her neck under….Melvin’s overweight, blubbery frame.” In order to protect Marcy—who’s only one strike away from eviction—they smuggle Melvin’s body back to his apartment. There, Celia discovers mysterious pills that point to foul play. Later, Melvin’s ex-wife, Edith, who succeeds him as board president, realizes something is amiss about his demise, and she blames Marcy. Then other community residents start dying under mysterious circumstances. Celia, widowed three years ago and only just coming into her own after a bad marriage and a lifetime of meekness, is determined to get to the bottom of the mystery. However, she’ll have to keep it all a secret from her 33-year-old daughter, Allison, who’s just moved in with her after leaving her husband. Celia finds out that all the women around her need something, whether it’s a new man or a 50-year-old list of cha-cha dance rules.

Metzman writes with humor and a sharp eye for characterization, as when she describes how Deb’s “rheumatoid arthritis…affected every joint and muscle in her body, except for her acerbic tongue.” The book is a pleasing blend of camp and procedural mystery, playing up the geriatric nature of the setting while also taking the concerns and passions of Celia and her peers seriously. Overall, Metzman has crafted a compelling and surprising whodunit whose plot likely won’t end up where readers expect. In the end, however, it’s largely a character-driven affair, and readers will enjoy the main trio’s moments of levity—as when they smoke marijuana in Marcy’s apartment or pick up men at Fritzy’s Rendezvous—as much as the twists of the investigation. The author artfully constructs each of these characters, giving them backstories full of regret and frustration that lend literary weight to their sometimes-comical present. Celia moved to Florida to spend her golden years in paradise, but the author shows how it now provides her an opportunity to look back upon her entire life: to correct mistakes, recognize injustices, and forgive her younger self for not always having enough strength. It turns out that retirement provides plenty of opportunities to turn things around—and to solve a few murders as well.

I’ve been spending a lot of time at a retirement village lately. My father lives there. I love him. And so I go and meander about at his side — greeting the ladies (mostly the ladies) who sit on the shaded benches or down in the garden or by the window in the cafe. There are scooters, walkers, canes, and ambling feet. Stories passing by.

I have not, to my knowledge, encountered cha-cha babes throughout my village jaunts, though you might talk to me, if you wish, about the line dancers. Philadelphia writer Frances Metzman, however, has encountered such figures — or at least she has in her imagination. She’s put the vision to fortitudinous use in her new fast-paced and psychedelically covered novel The Cha-Cha Babes of Pelican Way. Sex. Murder. Serial murder. Embezzlement. More murder. Betrayal. More sex. Oh, and, yes, not just cha-cha but the rules of cha-cha, which include “don’t be afraid of resistance. It opens new horizons” and “judgments immobilize the mind. They limit freedom of choice.”

It all goes down at the Florida retirement community where Celia Ewing, a 65-year-old widow who can pull off a cleavage-bearing outfit and  thong to better effect than her daughter, has found herself caught up in a mystery that may cost her and her daughter their lives.

The curtain goes up on a frantic call in the middle of the night. Celia’s new friend Marcy is in a predicament. Marcy has been flattened, to be specific, by the hulking weight of her senior citizen boyfriend, who has died during their secret tryst. Another friend has been called in to consult. They do the only thing they can think to do, the only thing right-thinking people in such a predicament would, of course, do — swab the naked body, wrap it in blankets, and wheelchair it back to its bed.

You know — as well as they can.

The imbroglio involving Marcy’s secret lover is not the only weird stuff going on at Boca Pelicano Palms. The death rate among the “oldsters,” for example, is suspiciously high. So is the death rate among people associated with Global HMO’s Well Services, the caregiving organization with close ties to Pelicano. And what’s up with Deb, the third cha-cha babe, who’s losing parts of her mind at a precipitous rate? Finally, is Celia’s new lover (who also happens to be an old boyfriend) part of the good gang or the bad gang, to be trusted or to be denied? Finally, finally, will Celia’s mostly estranged daughter, who has nevertheless moved in with Celia (and gotten a job, coincidentally, at Global HMO), learn to love Celia for who Celia has at long last become?

The plot revs, tilts, bangs. There is gunfire. There is a car chase. There’s some fancy computer work and Plan A and Plan B and hiding in small spaces and sneaking wires onto jackets. There is also the liberation of the cha-cha — both the dancing lessons the ladies take and the rules they try to live by. Metzman writes of Celia:

Those times infused her with pleasure, injected her with new life. Swaying to a cha-cha rhythm, in sync with another person, she exploded with internal combustion, feeling a high no medication could imitate. Her soul soared until her spirit hovered just above her body, watching the slow realignment of her moods from bleak to upbeat.

Metzman supposes with abandon, goes in for a few red herrings, and doesn’t shy away from financial forensics. And though  Celia professes herself to be an Alice Munro fan — “she loved Munro’s writing, the way she took a small incident or an ordinary person and revealed, layer by layer, the depths of intelligence, behavior, and feelings in people” — Metzman seems to take her greatest pleasure from the shenanigans of her characters. The book is nearly 500 pages long, but you’ll finish it in a day. You’ll want to know if Celia wins the day — and if she’ll keep rocking that thong.