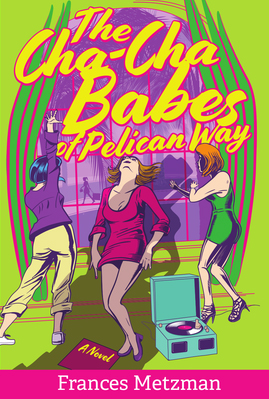 Would you move a dead body for the sake of your best friend? Ask cha-cha babe Celia Ewing, a sixty-five-year-old widow who has just settled into Boca Pelicano Palms, the Florida retirement community of her dreams. When Celia’s best friend Marcy calls her and their friend Deb for help in the middle of the night, they find a naked Marcy trapped under the body of her beau, the community’s board president, Melvin. And he’s dead. The three friends secretly move Melvin back to his apartment setting off a chain of events that will threaten to tear their community apart and send them to jail. Melvin is one of a number of residents who are dying under suspicious circumstances; and soon Celia becomes an amateur sleuth in an attempt to identify what she suspects is a serial murderer.

Filled with humorous, witty observations about retirement communities, the realities of getting older, and the promise of new love, the Cha-Cha Babes of Pelican Way celebrates the deep bonds of female friendships, the desire for companionship at any age, and shows us that it’s never too late to learn how to cha-cha through life.

“The Cha-Cha Babes of Pelican Way is a fast-paced romp of death, passion, and dark humor. Way too damn much fun!”
— Jonathan Maberry, New York Times best-selling author of Glimpse

“Frances Metzman…has… put the vision to fortitudinous use in her new fast-paced and psychedelically covered novel The Cha-Cha Babes of Pelican Way. Sex. Murder. Serial murder. Embezzlement. More murder. Betrayal. More sex. Oh, and, yes, not just cha-cha but the rules of cha-cha, which include ‘don’t be afraid of resistance. It opens new horizons’ and ‘judgments immobilize the mind. They limit freedom of choice.’

“… a compelling and surprising whodunit whose plot likely won’t end up where readers expect. Metzman artfully constructs each character, giving them backstories full of regret and frustration that lend literary weight to their sometimes-comical present. A thoroughly entertaining, lighthearted murder mystery.”
– Kirkus

“The Cha-Cha Babes of Pelican Way is ready to be next to the sun tan lotion and towel as it makes its way to the beach this summer. Before you know it, this novel will splash you deep in the water of an adventure as it will captivate all the senses of in your body leaving you begging for more.”
– The Sun Sentinel 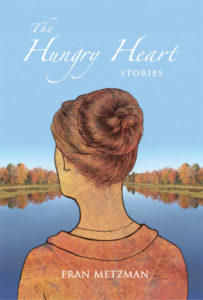 THE HUNGRY HEART STORIES is a short story collection that deals with the universal search to fill a void. Fran Metzman, co-author of UGLY COOKIES, serves up a plate of quirky and disparate characters in these captivating stories.

A grieving husband in the darkly funny “Right Seasoning” conjures up his deceased wife’s presence in the beloved kitchen they once shared.

From “My Inheritance” tells of a grown daughter, trying to find the love and peace she has always craved with her dying mother to “Getting Closer”, the story of a woman left with the violent legacy of food that defined her life – we find the characters reaching the low points and triumphs of human emotions.

Particularly poignant is the story, “The Reunion”, about a woman born into poverty who reaches the pinnacle of success but with questionable sacrifice.

Each of the twelve stories and one essay incorporates food as a means to some end or fulfillment.

“Fran Metzman’s short stories are a feast, dig in and devour them quickly. Story after story, they will tease your palate, fill you with emotion, and keep you longing for more. Each character comes alive. This is a beautifully written book.” – Gloria Mindock, Cervena Barva Press

“In Fran Metzman’s collection THE HUNGRY HEART STORIES we meet mothers and daughters, lovers, career women, wives and husbands, and feel that we know them all.” – Joy E. Stocke, founder & editor-in-chief of Wild River Review and author of A MEMOIR, ANATOLIAN NIGHTS DAYS & NIGHTS

“ THE HUNGRY HEART STORIES is an apt and striking title because it reveals what centers this short story collection – the need for the heart to find sustenance and the gathering at a meal which is so often the intersection of our lives. Metzman is a deft storyteller who gets into her characters to reveal them and tell us something about the world we live in.“ – Peter Krok, author of LOOKING FOR AN EYE

UGLY COOKIES, a mainstream romantic comedy, explores family relationships and how they affect love, careers and marriage. Bridget Bernstein is a thirty-two year old social worker dominated by her mother, a woman who has made a fortune selling ugly cookies. When Bridget breaks into her ex-boyfriend’s apartment, a comedy of errors leads to disaster. The fall-out sends Bridget on a hilarious journey of self-discovery. In her search for love and spirituality, she meets Carson McAlister, a conservative banker who has left his midwestern roots. Their worlds collide, reshaping their lives in ways they never imagined.

“These are the kind of heroes I want as friends – spunky, smart and socially conscious.” – Rachel Simon, author of THE MAGIC TOUCH and THE WRITER’S SURVIVAL GUIDE